Before he was a saint, Guilhem of Orange was a soldier. Born in the mid 9 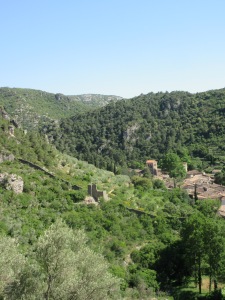 th century, he was cousin and confidante to Charlemagne. Renowned as a warrior, he fiercely defended the southern borders of the Frankish empire, battling Gascons, Basques and Moors, ultimately forcing these last to retreat to Barcelona. Then he retired.

Seeking peace and quiet after years of battle, Guilhem founded a Benedictine monastery in the remote Gellone valley in 806. For the next several centuries th 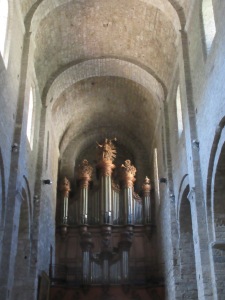 e abbey thrived, drawing pilgrims with two reliquaries: one containing the remains of the abbey’s famous founder; the other, several small pieces of wood, said to be part of the cross on which Jesus was crucified and given to Guilhem by Charlemagne. Indeed, the abbey became an important way station along

one of the European routes to the shrine of St. James in Compostella, Spain. By the middle of the 11th century, the monks at Gellone Abbaye, now renamed the Abbaye de St. Guilhem, in honor of its recently canonized founder, were wealthy enough to build a new church and cloister.

In succeeding centuries, however, the abbey declined, suffering first from neglect and then from desecr

ation and pillaging. Abbots drawn from aristocratic families and named by the King, rather than elected by the monks themselves, allowed the  vitality of the monastery’s enterprises to dwindle. During the 16th century religious wars, militant Protestants pillaged the abbey and defaced or destroyed much of the sculpture. By the French revolution, only six monks remained; the monastery was dissolved a 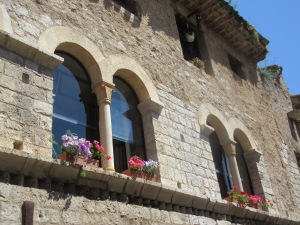 nd the buildings sold to a local stonemason, who carted off the stone for use in other buildings, peddling choice bits to wealthy clients. Eventually, parts of the abbey–columns, windows, statuary and more– wound

up scattered across Europe. Some even came to rest across the Atlantic; several  columns dating from around 1200, were purchased by a wealthy American collector. They’re now in New York’s Cloisters Museum.

Today, what’s left of the abbey and the starkly

beautiful Romanesque church sit in the middle of a well-preserved medieval village, with a population of about 250. Some grapes and some olives are grown nearby, but the village survives mainly on tourism.

In the height of the season, in July and August, thousands of visitors will make their own pilgrimage to St.-Guilhem-le-Désert. On a beautiful, warm Sunday in mid-May, the number of tourists already equalled the number of residents.

It’s no wonder. The old soldier was clearly on to something. It’s an idyllic retreat.  The lush greenery and craggy peaks are a 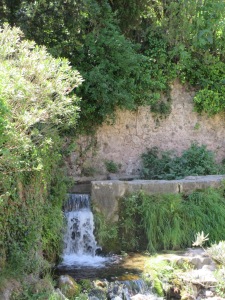 nning setting for the mellow old stone walls and tile roofs. Flowers bloom profusely in the sun. And everywhere there is the sound of running water—from the small rive

r that runs by the town, providing a series  of picturesque  waterfalls, as well as from the num

erous spigots and fountains –flowing with potable water — scattered around the town. Even underfoot, clear water runs, criss-crossing the village in a series of open gullies and stone-topped drains.