Paris is weird right now. At least that’s what the Parisians I met on my recent visit told me. It’s too quiet. There’s no buzz, no excitement.  Doubtless that’s true.  Certainly traffic at restaurants, hotels and stores has all but collapsed, first under strict stay-at-home rules to prevent the spread of the corona virus

and now from the dearth of summer tourists. Theaters, large and small are dark.  The big Paris l’été festival has been cancelled.  Restaurants have largely closed their interior dining rooms and moved what tables they can outside.  Traffic, both pedestrian and motorized, is scant, though bicycles and scooters are abundant.

But here’s the happy little secret:  For those of us fortunate enough to be tourists in Paris in this bizarre summer, it’s fabulous.

The museums are open and blessedly uncrowded. All museums and monuments are requiring advance reservations, in order to enforce social distancing and hold attendance to just 50% of usual. But for the most part, the strictures are moot; there aren’t enough people requesting slots.   I booked a reservation for the Louvre the

day before I wanted to go. It took no more than 5 minutes to get through the first ticket check and security.  A year ago, I waited at least 40 minutes in last July’s heat wave to spend my allotted ten seconds in front of the Mona Lisa.  This year, the line was minimal and guards were more relaxed about moving folks along.  (Still, it wasn’t worth a second look, as the museum’s most popular exhibit rests behind glass and 20 feet away from viewers.  I’d rather go gaze at the spectacular Winged Victory of Samothrace, instead.) The Orangerie, where Monet’s monumental water lilies panels are mounted, was nearly empty. So was the Marmotton Monet museum, with its special exhibit on Cezanne.

The longest I waited in line for anything, was about seven minutes, to get into a special exhibit of James Tissot’s work at the Musee D’Orsay. But that was on late-opening night, which usually attracts larger than usual

Another plus: Getting great photos was easy. I often end up not even taking pictures of places I’d like to remember because I hate photos with people in them. Especially people I don’t know, casually smoking a cigarette in the doorway of an elegant 18th century building or striding purposefully across an exquisite garden in shorts and a vulgarity-stewn T-shirt.  This year: No problem!

But perhaps the best thing about visiting Paris in this strange year of Covid, was the  slowed-down pace.  Without having to worry about fixed time to visit a museum  or wasting precious hours in lines or standing about waiting for a table at a café, I had

oodles of time to just relax and ramble through the city.

One day, I found myself in a district dotted with stores providing specialty cookery, pastry and candy making equipment.  In retrospect, it made sense, as it was close to Les Halles, which until 1971 was Paris’s central fresh food market.  The grand-daddy of the shops, E. Dehillerin’s feels more like an old-fashioned hardware store than an upscale cookware supplier.  Its wooden floors creak and its few cramped aisles are crammed floor to ceiling with copper pots, brioche pans, fluted tartlet tins and the like. When you’ve found what you want (or asked for it), a shop assistant carefully takes your finds to an old wooden countertop and slowly and carefully wraps each item in paper.  Once you’ve paid, you present him with the receipt and he hands over your new treasures.  The minute I found the shop I knew:  This was it! This was the Parisian shop where my sister must have found that perfect little wooden-handled angled spatula that I covet and she zealously protects.  Eureka!

Another day, while meandering around looking casually for a cobbler who I might persuade to punch a new hole in shoe strap, I came upon Le Grand Café Tortoni. 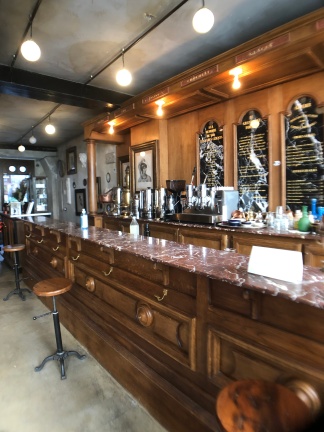 The charming Grand Cafe Tortoni still has its original bar and finishings. 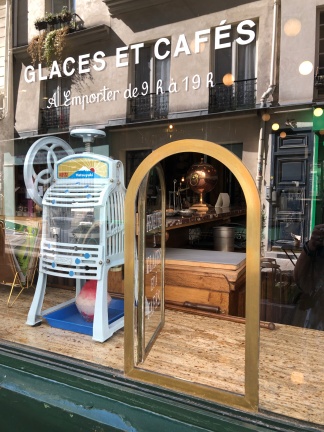 Check out the window in the window, for passers-by to get their ice cream!

Tucked away on a Marais street which seems to specialize in gentlemen’s tailoring, the 19thcentury shop is a wood, glass and marble step back in time. At one time a very successful and popular café and ice cream parlor, founded by an Italian gelato maker, it’s now home to a small café cum perfumerie, carrying scents, oils, lotions and so on from one of France’s oldest perfume makers.  Officine Buly was founded in 1803 and revived after a century of sleep in 2014. I can’t tell you how good all the company’s dozen or so fragrances smell, since I went straight for the one with a name that conjured up the crisp, green scents I love:  Scottish Lichen.  It came home with me that day.

If you leave a little to serendipity, you’re sure to find delights in Paris:  The last remaining puppet shop in the city on the Ile de St. Louis.  Betrand’s, a bakery/café on the

Eating one of these monster meringues from Bertands’s took two days!

left bank with a window full of the biggest, most colorful (and most delicious) meringues you can imagine.  The fascinating exhibit hung on the protective fence around the construction site of Notre Dame, explaining how the cathedral’s structure is being carefully dismantled and/or shored up in preparation for eventual repairs.  A tiny shop that specializes in beautifully made hand-forged Laguoile knives.  The charming little house of an 18th century Italian rogue who convinced a gullible Bishop that he had cured him of asthma before the two were caught up in the infamous “affair of the necklace”, which helped turn the Paris populace against Marie Antoinette.

Oh, and by the way, Parisians are doing a great job complying with Covid health and sanitation measures.  Every shop has hand sanitizer right at the door and shop assistants are vigilant about insisting customers use it.  Ditto, mask use and limitations on how many people are in a small store at one time.  About a quarter of the general population seems to be wearing masks walking in the streets or parks, but all put them on when entering a building or transit of any sort, and even when just standing at the bus stop.  Hand sanitizers are everywhere, including stands at every bus stop and at the entrance to every Metro stop.

4 thoughts on “Paris in the Time of Covid”