All things considered, phase one –the exploratory phase—of my itinerant retirement is going remarkably well. Which is not to say that there haven’t been some “oh shit” moments.  So a little advice for anyone contemplating a similar adventure:

1. If you take a bus to a small town out in the countryside, make sure you know where to catch the only bus back.

The ride to Le Vigan, a small town on the edge of the Cevennes mountains was lovely. The goat cheese festival that drew me there, not bad, and I had a pleasant afternoon in the leafy park on the edge of town. I sampled some cheeses, lunched on grilled lamb and fresh salad, and dozed in the dappled sunshine. Edith Piaf recordings over a PA system alternated with lively and entertaining performances by the local band, it’s members clad in a dozen different iterations of striped shirts, pants and hats.

The bus making the journey back to Montpellier was scheduled to leave at 4:55, and I was waiting for it 10 minutes early. I wasn’t too concerned when it wasn’t there at 5:00. But by 5;15, I was pretty sure something was wrong. Up till then, every bus I’d taken had been smack on time. So in my fractured French, I asked a passing couple if they knew if the bus was ever this late. No, they answered in English. But the bus had already left, from the main stop in the town center. It didn’t come up to the final stop in the park on festival days. Some 60 euros poorer, I left the next morning, having spent the night at a local hotel and eaten an overpriced veal ragout for dinner. Still there was one plus: My hotel room had a tub and I got a nice long bath that night.

2. Always arrive at a new apartment with a stack of tissues in your luggage—especially if you arrive late at night or on a Sunday, when stores are closed. Apparently, you can’t count on a supply of toilet paper.

3. Do not overestimate your ability to learn new skills at age 62. I figured “how hard could it be to ride a motor scooter?” I should have been tipped off by the three grinning Frenchmen watching me from across the street as I climbed on for the first time. They’d clearly seen this drama unfolding before. I managed to wave jauntily to them and successfully traveled about 50 meters before I had to turn a corner. Down she went. I wasn’t hurt, fortunately, merely stuck under the tipped-over scooter and trying hard not to look embarrassed.

The young man who bounded over to help me up and right the scooter didn’t speak English, but he was pretty clearly saying “I don’t think this is a good idea”. I managed in a combination of Franglais and pantomime to convey that I wanted to get the scooter over into a nearby parking lot, where I could practice a bit more before taking it on the road. Reluctantly he wheeled it over, while making me promise “just one more try.” It wasn’t enough. This time, when the scooter went over, the side mirror broke and I called it quits. But I got to ride back to the shop on the back of the scooter, holding on to a cute French guy!

4. Do not order something based on a picture in a menu. It sure looked like a nice grilled piece of fish—something like tuna or swordfish. It tasted like cardboard and had the texture of a rubber boot. Sepia a la Planche turns out to be grilled cuttlefish—aka a chunk of a big squid.  In fact, don’t eat at any restaurant that has pictures in its menus. It’s probably aimed at tourists who the proprietors figure wouldn’t know good food anyway and, in any case, won’t be back.

5. Ask which floor your AirBNB apartment is on. The first one –in Valencia—was four long flights up. It made me feel better about the volume of Spanish cheese and fresh bread I was eating, but reclimbing those stairs for a forgotten umbrella was torture. As for hauling 50 pound suitcases up and down? Oy. The second one, in Montpellier, was on the ground floor. Easy on the knees, not so good for letting in sunlight. And when the windows were open, you could reach out and pet any passing dogs (windows don’t have screens here.)

6.  If you park in a garage, have cash, even if the signs say they take credit cards.  Some of the self-pay kiosks don’t take credit or debit cards from outside the country you’re in. Note that French drivers are unbelievably impatient with anyone who holds up the exit lane figuring that out.

7. Watch out for those fruity wine drinks. The first time I ordered Aqua de Valencia, I thought it was a generous pitcher that I got, but what-the-heck, it ‘s just OJ with some cava (Spanish champagne) in it.  It wasn’t until I tried to stand up (and later looked at the bill I’d signed) that I realized it had clearly been 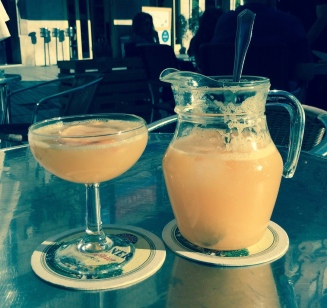 meant for two people. And it wasn’t until a day or two later that I learned, no, it’s not just a bucket-sized Mimosa.  Aqua de Valencia packs a potent punch of gin and vodka as well as the cava.

As for Sangria: Well, we Americans tend to think of it as a fruity summer drink for lightweights..  Take some red wine, add lemonade or fruit juice or club soda and a bunch of cut-up citrus fruit and you’ve got a nice, mild, refreshing summer drink.  Not in Spain you don’t.  Sangria here is red wine mixed with cava and brandy, with fruit soaked in enough brandy to preserve it for years.  I had one; it was good. I had another and staggered out of the bar, forgetting to pay my bill.

8. Just let your hair grow.  Despite checking for recommendations online, casing various stylists’ shops to see if the customers walked out looking good and happy, and even stopping total strangers in the street to ask where they got that really nice haircut, I ended up with some of the worst cuts I’ve ever had.  In Malaga, the hair on one side of my head was a good 1/2 inch longer than on the other. And considering that the longest hair on my head was about 3 inches, it was quite a sight.

9. Watch where you step. Pooper-scoopers are apparently unheard of in many European cities. Ask me how I know.

10.  If an AirBNB is described as “right in the center of things”, keep looking. My Malaga apartment was on the first floor (that’s up one from the ground floor in Europe) facing into what looked like a quiet little square a few blocks from Plaza Constitution, the main gathering place in the old quarter.  Perfect, right?  Wrong. At around 9 that first night, the doors on what had looked like shuttered residences on the ground floor were thrown open. Scores of tables and chairs filled the plaza and people began to gather.  Hundreds of them  And the party went on till at least 5 AM every night of the week except Mondays for the entire month I was there.  No earplugs in the world could have deafened that noise of that crowd.

4 thoughts on “Learned the Hard Way”