So how would you expect a French supermarket to differ from your average suburban Safeway?  Some of my expectations were right on the money. Others, not so much. The French cheese selection was pretty phenomenal–got that one right. Ditto, the wine department. The variety there dwarves the pretty meager selection of soft drinks–the reverse of what you’d find in a U.S. supermarket.

But the prominence of Red Bull?  That was unexpected, though maybe it shouldn’t have been. I didn’t realize that it was a European (Austrian) company. Slurping up sweet, super-caffeinated soft drinks seems so quintessentially American.

The French don’t have Americans’ mania for low-fat, low calorie versions of everything. Lots of yogurt, for example. But in that whole big dairy case, there were only two low-cal fruit-flavored versions. Plenty of “cane-sweetened” ones and lots of plain–aka.”natural”–yogurts-plus a smattering of Greek style yogurts. But no flavored Greek yogurts with low-cal sweeteners.  I miss my Chobani! 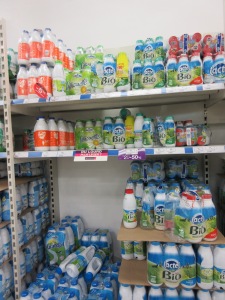 It was surprisingly difficult to locate the milk in the store. That’s because the packaging in France makes it look like a cleaning product and it isn’t located anywhere near a refrigerated case.

Prepared entrees are more exotic  than in the U.S.   That “Lapin” in the lower corner…it’s rabbit.

And if you think Americans demand convenience, check this out: The French can buy their bread with the crusts already trimmed off!

And finally, the French are known for their design esthetic, right? But  neon-colored toilet paper? Really?