Valencia’s Mercado Central is reportedly the largest market in Europe. I can’t vouch for the veracity of the claim, but the place is huge—some 8,000 square meters of interior space. It’s also beautiful. And kind of creepy. It’s beautiful for two reasons. First, the building itself is lovely. Designed in 1914 and inaugurated in 1928, it’s a modernist wonder of steel, glass and

tile work. Light floods into the market from a huge central glass dome. And second, it’s filled with the most gorgeous and colorful  fruits (fresh and dried), vegetables, herbs, spices and nuts you’ve ever seen. Huge pulpy red peppers. Fat bunches of  freshly picked onions—fresh white globes with long green tops, like some kind of mutant scallion. Grapes nearly the size of golf balls. Piles of bright red strawberries that not only look delicious, but actually smell delicious, too. Mountains of sweet oranges. And strange fat pods of what I assume is some kind of bean. 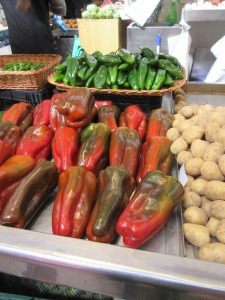 Wandering through row after row of produce stand, the choices are overwhelming. It’s simply way too much for even me, the consummate comparison shopper to assess the quality and prices of produce at each stall. I figure the best practice is to look for the stall with the longest lines of what are clearly locals and just buy there. It’s tougher to figure out a strategy for choosing among the dozens of sellers of Spanish sausages, hams and cheeses. both domestic and imported. The booths run the gamut from small and unpretentious to large and polished. I buy from a small place one day, and a large one at my next visit, before I find the one I’ll patronize from now on for one simple reason: It has a clerk who speaks English and doesn’t seem to think I’m nuts when I say, just give me a different kind of cheese and Iberian ham today from the ones I’ve already bought from you. I want to keep trying new ones!

Along with the produce and deli-type vendors, sellers of olive oils, wines, dried fruits and nuts, bulk quantities of spices—including the saffron essential for an authentic paella Valenciana—fill the central part of the market.  Around the outer edges of the building, it’s a different story. That’s where the creepy parts are—the butchers’ stalls, the poulterers and the fishmongers.

At first, it just seems as if the cases are filled with rows of roasts, chops, steaks, filets and chicken—whole roasters and the usual assortment of breasts, drumsticks and thighs. Then you start noticing items that aren’t usually found at your local Safeway’s meat and poultry section. Or even at that specialty butcher place up the street:

Piles of chicken feet. OK—maybe that’s not too weird: after all, you see them in Chinatown. But chicken heads? What on earth do you do with a pound or two of chicken heads? Chicken carcasses with the heads and feet still on them, as well as a few scattered feathers. Plus geese, ducks, partridges, quails and a variety of other game birds. Then, there’s the whole rabbits, with their milky eyes staring out of distressingly skinned rat-like faces. Pig’s feet. Pig’s ears. Pig’s everything. And the larger, darker red versions from cattle. Livers, of course. But also kidneys, lungs, hearts, brains, thyroids an 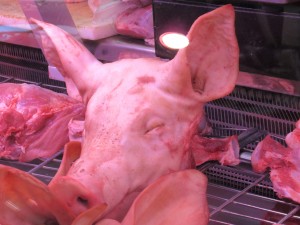 d what seemed like more organs than exist in your average farm animal. Plus something that looked suspiciously like some animal’s penis, not to mention the whole heads—both pigs’ and calves’.

Once, when I worked on Capitol Hill for a Senator from Nebraska, I toured a beef slaughterhouse and packing plant along with a group of other legislative aides. When it was over we all happily chowed down on thick grilled steaks. After walking through the butchers’ stalls in the Mercado Central, I was giving some thought to vegetarianism. It’s not that I’m bothered by the idea of eating what was once a live animal. Man is, by nature, a carnivore and has been hunting and eating prey for centuries. I have no illusions about where those sanitized deboned, skinned chicken breasts really come from. And, in principle, I applaud the idea of not wasting huge parts of a slaughtered animal.Still, the idea of eating lungs, eyes, tongues, etc. makes my stomach do flip-flops and renders the notion of swallowing even a mouthful of tender, flavorful filet mignon unappealing.

As for the  seafood area, it’s  an exercise in attraction/aversion. There’s the usual salty, fishy smell, of course, and

a general feeling of dampness.  Counters are covered in the most amazing display of sea life outside an aquarium. Tiny fish, intended to be deep-fried whole and eaten. Whole and filleted slabs of larger fish, only some of which are recognizable.

Spiny black sea urchins. Octopus and squid of various sizes and varieties. Teeny, tiny little soft-shelled clams and palm-sized oysters.   Piles of at least a half dozen different creatures which I know must be some  limb on the shrimp family tree  but are unidentifiable. Buckets of wriggling eels. Even as I nearly gag thinking of swallowing some of this stuff, I can’t look away, amazed at the sheer variety and novelty of what’s before me.