The itinerant is itinerating again.  After spending the past two years settling into life in Spain — buying a home and watching it being built, struggling with the Spanish bureaucracy and learning (to my great regret) about Spanish taxes — I headed off a few days ago on what I’ve been referring to as the Great British Isles Road Trip. From June 1 to mid-September, I’ll travel around Ireland, Northern Ireland, England and Wales, staying mostly in a series of homes that I’ve “swapped” the guest portion of my new home in Spain for. There’s a 400-year old stone cottage in the Cotswolds;  a new apartment on the South Bank in London; a fisherman’s cottage in Port Isaac, Cornwall (aka Doc Martin’s Portwen); a holiday apartment on the Northern Irish coast of Antrim; and a historic thatched cottage near Salisbury, among others.  I’m looking forward to all of them.

Last night, I landed at the first of my exchanges: A charming, modern cottage in County Donegal, in the far northwestern part of the Irish Republic. Just getting here was a major adventure: A drive of about 2500 kilometers 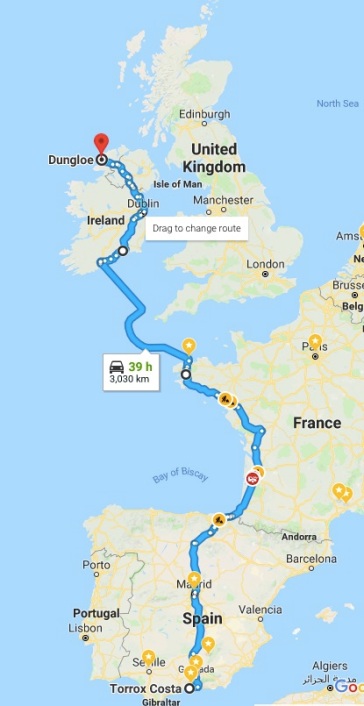 in my car. And that doesn’t count the 17-hour ferry ride from France to the Southeast coast of Ireland.  When you look at a map, Europe seems so small! The countries are so close together!  But 2500 kilometers is like driving from Washington, DC to Amarillo, Texas.  Of course, when I was done I was in Ireland, the land of freshly caught seafood, Guiness, soda bread, and lilting accents; rather than the place where Bob Wills is still the king.

Most of the drive through Spain was a tad boring, if blessedly uneventful. The stretch through the Sierra mountains is beautiful, but I’ve done it before. From there to Madrid and then north to Zaragoza is mostly flat, hot and uninspiring. But you could make good time and when I hunted down a bed for the night, I encountered the novelty of what was essentially a drive-though hotel!   You check in from your car at a tollbooth-like structure at the entrance to a ground level parking lot below the hotel rooms.  Once admitted beyond the barrier, you are confronted with a series of garage doors, one of which magically opens for you.  Drive in, park, close the garage door and head up the interior staircase to an ultra modern room. No need to unpack the whole car! Or worry about leaving your stuff in a car in an open parking lot!  In the morning, pull out of your garage, hand in your key at the tollbooth reception desk and the barrier swings open for you again. Cool!

Day two brought some gorgeous scenery. I opted for an inland route rather than the motorway that runs up the northern coast of Spain into France. Heading through the Pyrenees was a good choice.  Deep green forests and towering cliffs of dark grey stone , with some mountaintops still capped with snow, at the end of May.  Steeply raked green pastures, dotted with cattle or sheep.  And just after the incredibly long tunnel that transverses the Spanish-French border, a lovely pristine town perched on a hillside and crowned with a beautiful grey-stone church.  In fact, most of the Aquitaine was attractive, filled with lushly green, prosperous looking farms.

As I headed further north, however, time seemed to melt away, while the miles dragged on.  GoogleMaps had led me to expect a drive of about 9 hours from my stopping point near Zaragoza to my goal of Nantes, France. In fact, it took closer to 12 hours and I didn’t even make it to Nantes.  I’d check the time left on my Google maps app every hour or so and discover that I had only chipped 15 minutes off the time remaining.  No idea what was happening. but it began to feel as if I were in some kind of enchanted land where time and space were disjointed. At one point, after driving for about 30 minutes from my last peek at Google maps, I was astounded to discover I had added 10 minutes to my remaining drive time!

Then, another night on the road, and one more at sea. Turns out that the ferries that ply what I have learned is called the Celtic Sea are rather like small, low-brow cruise ships. Having grown up riding ferries that carried as few as two or three cars or as many as 40, on trips that never lasted more than 4 hours, this was a new experience for me. The meal aboard was mediocre and expensive, but after two days of mainlining diet cokes and subsisting on road food, I was happy to have it. The bed was narrow and hard, but I liked the rocking and slept well.

AT 11 the next morning, we docked in 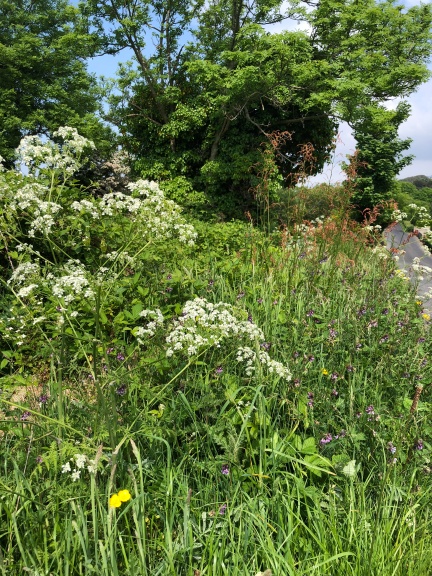 Rosslare, at the far southeast corner of Ireland. Dungloe, where I’m berthed for the next two weeks, is in the far northwest in County Donegal, which I am learning to pronounce correctly. Americans are inclined to say DON-e-gal. Bu it’s Don-e-GAUL. When you put the emphasis on the wong syllable, people look at you as if they have absolutely no idea where you are talking about.  Gradually, it dawns on them; “Oh you mean Donegal!)  I’ve also learned that Dungloe, pronounced Dun-GLOW as I was doing, is unrecognizable to the locals.  It’s Dung-LOW or perhaps DUNG-low. I’ve still not quite caught where the emphasis goes, but in either case, the G all but disappears.

The drive north was pure pleasure.
I stopped for some fresh strawberries and munched on them along the way. The roads, even the smaller ones that wind up and down hills and around a million curves, were clear and are well paved.  And the countryside is simply gorgeous.  Delightfully,  the weather behaved fairly well, too, veering from light misty rain to sunshine every 20 miles or so. It surely is no wonder everything is so green.  I marveled at how very different it is from Spain. And yet, as I climbed further north, the  topography changed. It’s rougher terrain here than in the south. One gets the feeling it’s a harder living made off the land or off the sea. And despite the obvious differences, there are interesting echoes of Spain: The low white houses; here, concrete or stone under their skins of white cement and paint, brick in Spain.  Rock strewn hills and scrubby vegetation spreading out to the horizon. And splotches of shocking pink  (oleander in Spain, rhododendrons in Ireland) in an otherwise green and tan landscape. 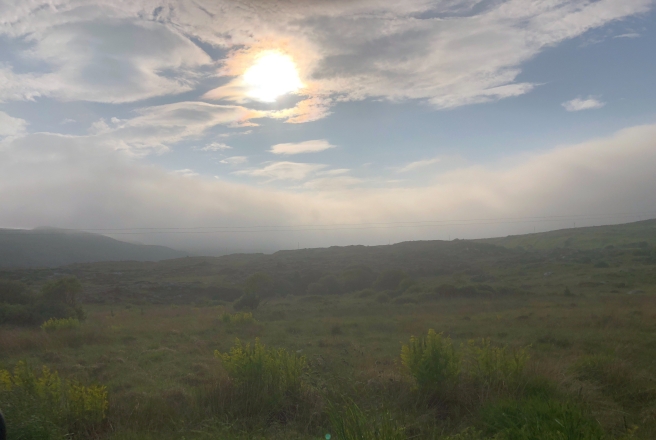