Not for nothing is Andrea Borderi called genius. Every day a small crowd gathers

at his shop at the edge of the daily outdoor market in the old section of Siracusa, to watch him ply his trade. Over the course of a few hours, he’ll make perhaps a hundred sandwiches, each of them a work of art. 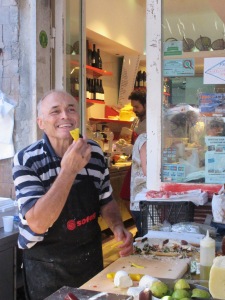 Like other artists, Borderi has complete creative license.  Customers don’t tell him what kind of sandwich they want. They simply tell him how many sandwiches they want and he takes it from there, drawing from his palette of meats, cheeses, vegetables and condiments as the moment’s fancy takes him. But the basic format remains the same.

1. Slice a foot-long loaf of Italian bread and scoop out a bit of the middle to allow more room for the scrumptious fillings.

2. Start with a layer of flavorful vegetables: Sun-dried tomatoes, marinated mushrooms, a bit of golden corn or perhaps a combination laid out in careful separate dollops along the bread.
3. Throw on a handful of greens–romaine, arugula, red leaf lettuce, etc.–along with some raddichio, all quickly and expertly chopped. 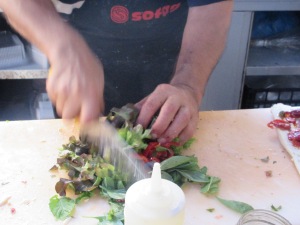 4. Dice one ripe red plum tomato per sandwich and scoop it on. Now grate fresh parmesan directly on the growing mounds. To complete this layer: Give it a squirt of extra virgin olive oil and squeeze on the juice of a freshly cut lemon half.
5. Add a layer of creamy white, slightly salty fresh mozzarella. While you’re slicing it, be sure to cut some extra pieces, handing them out to the customers in line. After all, no one is complaining about the long waits and most turn down the offer to have a sandwich made more quickly by an assistant, preferring to watch the show and enjoy the genius’ work. 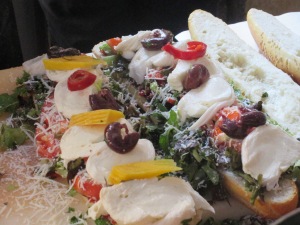 6. Pare a few thickish slices from a bright yellow cheese and place them on top, along with  few black olives.  Be sure to give the olives a smack with the broad side of a knife and remove the pits first!  If so inclined, sprinkle on a few small slices of a mildly hot red pepper for some extra color and zing. At this point, too, you might add a slice or two of a pungent sausage–salami, pepperoni or the like.
7.  On a sheet of butcher’s paper, layer some slices of your chosen Italian cold cut–ham, mortadella, proscuitto or the like.  Place a row of thick chunks of thrice-baked, creamy  ricotta on top of it. Depending on your choice of meat, you might sprinkle on some fresh basil leaves or dust the meat with wild Sicilian oregano (accomplished by simply shaking a dried bouquet of it over the food). Maybe drizzle a bit of local honey on top.

8. Now carefully use the paper to turn the meat and cheese into a neat roll. This is the point where the sandwich genius double checks his work, inhaling deeply, to ensure that the meat and cheese are seasoned correctly.
9. Plop the roll of meat and cheese on top of the already huge mound of goodies on the bread.  Top  it with the other half of the bread and carefully cut it in half, wrapping each half in butcher paper.

Time required to prepare two Borderi sandwiches simultaneously: about six minutes, while maintaining  interaction with the customers throughout. Borderi asks them  where they’re from, periodically hugs and gives the Italian two-cheek kiss to old friends, and hams it up for photos. It’s a show that his audience delights in. (“Obama!” says Borderi to Americans, offering them a high-five and a wide grin.)

And the sandwiches?  They’re phenomenal, as well as a tremendous bargain: only €5 for one big enough to feed at least two people.

2 thoughts on “How to Make A Sandwich, Sicilian Style”