Summer in Sicily reminds me powerfully of childhood. True, it’s a much more exotic setting than the small working class town I grew up in, and the thermometer indicates that it’s at least 10 to 15 degrees hotter most days than southern New England ever got. But there’s much that feels the same. The tempo of life, for instance.  The languor of Sicily in August feels a lot like I remember summers as a nine- or ten-year old: Waking late, with the sun already well up in the sky. Spending hours reading a book or just sitting idling, daydreaming. It’s what the Italians call dolce far niente—the sweetness of doing nothing.

There’s a freeing carelessness that feels like childhood, too. Most days I don’t bother with make-up, just smearing on some sunscreen. And much as I did as a youngster living close to the waterfront, I often simply put on a swimsuit and a light cover-up first thing in the morning, because it’s cool and comfortable and I know that at some point before the sun sets, I’

ll end up in the water. Those of you who know me well will recognize this as highly unusual behavior. I typically avoid occasions that require scanty clothing and don’t particularly like swimming either in pools or at beaches. But in Sicily it’s easy to leave behind the self-consciousness about dimply thighs, sagging boobs and ginormous butts. Women (and men) of all shapes, sizes and ages have no compunction about revealing far-from-perfect bodies—pasta-bellies and wrinkles be damned. (Of course, some of them do look pretty good!) I’ve even taken to wearing sleeveless tops in the only slightly cooler evenings, letting my usually camouflaged underams flap freely.

The neighborhood I grew up in was originally a summer community, made up mostly of small homes where families parked for the summer. As time passed, many of the homes were insulated and enlarged for year-round occupancy or new ones meant for that purpose were built. But there were still a number of summer-only residents when I was young; many of the neighbors had boats of one sort or another (I, in fact, had a canoe); and community life centered around the local beach.

In Syracuse, the homes aren’t wooden and are centuries older than the summer houses of Laurel Park, but they share a sort of casual summer shabbiness as well as the faint smell of mildew and damp, and typically inadequate, outdated and often jerry-rigged plumbing and electrical systems. And just as in my hometown, here wet swimsuits and threadbare towels hang outdoors on railings to dry; flip-flops are the footwear of choice for all ages; and meals are casual affairs, often eaten outdoors.

Although there’s no actual beach in Ortygia—the small island that is the antique and cultural heart of the working city of Syracuse—the sea is very much present. While three bridges connect one side of the island to the rest of Syracuse and a marina occupies another stretch, much of the island is surround

ed by a steep, fortress-like seawall, adding to the sense of Syracuse as a place  with a long history of cultures repeatedly clashing  and commingling. At one or two spots, long, steep staircases lead down to small sandy areas outside the seawall and a handful of tourists and locals spread their towels there to take in the sun and jump in the waves.

But I, along with most of the inhabitants, prefer the Solarium—a large wooden deck-like affair accessed by a metal stairway down an outcrop of boulders. Hovering over the water, it’s large enough for a couple dozen souls to spread their towels and bask in the sun until the heat drives them to 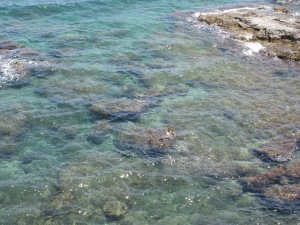 jump off into the sea. An adjacent spit of boulders shelters those who prefer a more natural, if less comfortable, place to park their bottoms and a higher diving point for the more intrepid teens and tweens.

The water is clear and its temperature perfect—cool enough to refresh, warm enough not to chill. Some people swim vigorously or snorkel, but most, like me, simply float, bobbing up and down in the modest waves, grinning at the deep blue sky and endless sea ahead of them.